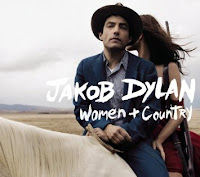 I don’t know one person that picked up the Jakob Dylan record from 2010. In fact, I have recommended it to a lot of people. “Women and Country” came out in 2010 and I was impressed with the change of pace for the singer. The band The Wallflowers being as big as they were, I figured that Dylan would be putting out another rock record, but that’s not the case with this one. This falls in line with the work his dad was doing, and really impressed me at first mention.

I was really into Neko Case in 2009 – 2010, listening to anything I could get my hands on from her. I saw that Jakob Dylan had her singing on “Nothing But The Whole Wide World” live on late night, and I was immediately sold on getting the record. Dylan does well to promote that country vibe here, and the topics of “Women and Country” flow through the same kind of roots that you’d expect from Dylan, Cash, and Nelson. The laid back vocal style of Dylan works very well here, and the band is stellar backing his lyrical elements. This is not a rock record and he is not stretching to meet the notes here, it’s an easy, care free movement that beckons to a simpler time in America.

With this record, you get 11 songs, 42 minutes of country and folk mixed in for good measure. I really enjoyed the pacing of the record, relying heavily on the tropes of what you’d expect from Nashville. This is not “modern country”, or anything that you would get from CMT. In fact, I was shocked to pick up this record and realize how introspective it really was. When you settle into the lyrics, you really feel as though this is a religious record more than anything else. When you hear “Down On Our Own Shield”, you may very well shed a tear thinking about your own life, struggle, and that’s the sign of a good record. There’s true magic found on some of these tracks, albeit, not without detailing slow moving progressions track to track. Some of my personal favorites here include the aforementioned, plus, “We Don’t Live Here Anymore”, “Holy Rollers For Love”, “Truth For A Truth”, and “They’ve Trapped Us Boys”.

Overall, Jakob Dylan’s “Women and Country” is an example of how a rocker could tone down everything and show new colors, without losing an edge. There’s a lot to this record, and you really do get emotionally attached to some of the lyrics. If you give this a chance, you’ll find that Dylan’s talents are not just in putting out modern rock, as his roots are firmly planted in the same path that Bob Dylan traveled down previously. Like father, like son, right?

If you haven’t heard or picked up Jakob Dylan’s “Women and Country”, check it out, it’s a really good record that doesn’t get a lot of mention today.