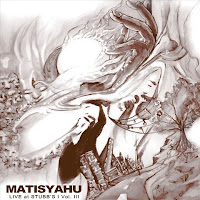 I first heard of Matisyahu long ago. I was in college and found out about his reggae and rap stylings, and was absolutely floored. I picked up the original set of records, before anyone else was into him, and then he got into rock radio in Los Angeles. When KROQ started playing his records nonstop on the hour, every hour, I saw a huge influx of fans go his way. That meant that I was not going to be able to see him live because the ticket prices started to get absolutely insane. I ended up selling the out of print recordings of his initial records on a Jewish record label, and kept tabs on the rapper, reggae artist. I noticed a stylistic change in the records that he was putting out, and while I admired some of the songs, and the lyrical elements, there was a point of disconnect with the original works and the new updates. He also wasn’t the same Jewish icon that he was, and well, I moved on, like many others. However, with the release of “Live At Stubb’s Volume 3”, the artist comes back to his roots and creates an outstanding sound.

There are only 6 tracks on this record, and yet there is over an hour of music to hear. Matisyahu doesn’t hold back here. He performs with great vigor, and showcases a great deal of influence throughout. Whether he’s rapping or he’s beat boxing, or playing through the singing of his religious background, he points towards a very eclectic sound. There is no “one” way to look at this record, because there’s a lot of influences coming through. This is evident from the beginning of “Searching”, to the sounds of “Warrior”. You get a bit of reggae, a bit of rapping, a bit of singing, and a lot of musical notes.

The backing band should take a lot of attention here. They really put together an epic sound, and while it’s toned down at times, the lyrical balances come through with beauty and grace. Matisyahu really puts together a beautiful record here, and it’s all done live. If you go see the artist, you will most likely be in for a good treat, because if his live shows are anything like this, you are going to be in bliss. The backing band is tight, the rapper goes through a lot of great notes, lyrical semblances of religious thought, and so much more.

Matisyahu “Live At Stubb’s Volume 3” is a great record. It’s over an hour, 6 tracks, and really pushes creativity on so many levels. I appreciate the overall sound, the lyrical balance, and the backing band’s connection with the freestyle, dub, and reggae sound. I’m impressed.

Pick up Matisyahu’s “Live At Stubb’s Volume 3”, it’s a laid back reggae, rap album well worth your time.

What's really cool, is that you can see "Live AT Stubb's Volume 3 Live" below. With Matisyahu talking about the record, and the showcase. It's a really cool thing to hear and watch.