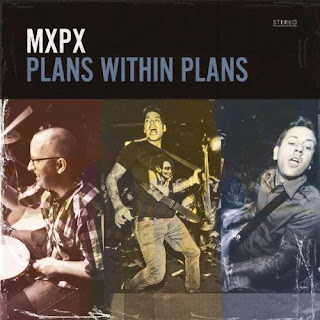 The opening lines from the track “Aces Up” reverberates for me a great deal. “If you push yourself away from everyone you know, how do you expect relationships to grow”, and it’s very true. I think about that right now as I type this because I’m going to get a divorce. There’s no happy ever after, there’s just a disaster that I’m facing off against. The song continues to remind us that life doesn’t just deal aces, and that we have to play the cards we are dealt.

Mxpx released this song as part of their record, “Plans Within Plans” which was put out in 2012, and it’s one of the better tracks from that release. The band’s frenetic punk rock style comes through with melody, and the positivity that comes through is quite good, making your toes tap.

As soon as I heard this track, I was hooked. Mxpx has a way of getting to the core of your punk rock ethos, and truly delivers with melody. The opening line, I kid you not, is often playing in my head as I battle depression and attempt to get professional help for my issues. The song isn’t too long, and yet it speaks with a sense of urgency, from the opening lines, throughout the rest of song, including the ending which tells us to stand up and fight.

Fans of punk rock will denote that the speed and chaos that comes with the genre is found within Mxpx’s “Aces Up”, but it’s in the melody that you find Herrera and the crew once again showing off their best work. “Aces Up” is one hell of a song to get you pumped up, and if you’re dealing with a downside, depressed, or just anxious, maybe this could be the seltzer that is going to give you a second lease on the day. I know it’s a good one for me to run with, even if it’s not the longest song in the world.

You can listen, stream, download, or buy “Aces Up” from Mxpx by clicking here.
No comments:

Fenix Tx “Self-Titled” came out in 1999. I was only 16 years old, and I was buying up anything that was pop punk, or had a distorted guitar in it. I do mean, anything. My collection grew to hundreds of punk and hardcore records that year, and as I was learning to drive, I was buying more and more records. It was an odd year, and since all I did was skateboard, play PS1, and listen to music, this was a solace for me. Of course, that was a rough year since I was in the middle of growing up, and getting rejected by girls left and right. Regardless, Fenix Tx put out a record that I recall the guys from Blink 182 saying that it was the one record they would take with them on a desert island. Maybe it’s because they were on tour with these guys, or maybe it’s because they just really liked the record. Whatever the case may be, let’s discuss a few notes on the Fenix Tx “Self-Titled” from 1999, since I already talked about “Lechuza” from 2001 on this blog here.

First and foremost, if you were around in 1999, you already know what style of music was getting pushed by the mass media. Watching MTV was definitely interesting because they were playing a ton of pop punk, led by Blink 182’s releases and videos. However, this band hit the ground running with their fourth track on this record, “All My Fault”, and a great amount of radio play on local stations like KROQ in Los Angeles. The band has a nice poppy flow to their record, and it’s your classic Drive-Thru Records type of punk rock. With a higher pitched vocal, and the same style that made bands like New Found Glory popular, the band plowed through 13 tracks of comedic pop punk, with a focus on skate punk guitar work, and sing-a-long choruses about being an angst riddled teenager.

Stand out tracks from this record are all over the place, including their re-recorded versions from their indie career, and the single “All My Fault”, which is still a favorite of mine. Even though they don’t have the track “Feliz Navidad” on this record, they still have a powerful mix of music in the 40 minutes that were released. My favorites include “Minimum Wage”, “All My Fault”, “Ben”, “No Lie”, and “Flight 601 (All I’ve Got Is Time). All of which are a good representation of 1999’s alternative, punk scene from so cal throughout the rest of the country.

I give Fenix Tx “Self-Titled” a 3 out of 5, even after all of these years.


You can buy Fenix Tx “Self-Titled” by clicking here.

Ah, the year was 2000, and while a lot of my friends were getting deep into new metal and other heavy forms of music, I was listening to punk rock and hardcore that was not on the radio. That’s why I picked up this record, Dropkick Murphys Singles Collection Volume 1. This is a record that came out right after “The Gang’s All Here”, and it’s one of the finer offerings that the band has put out. But before you groan about the fact that this is a collection and not an original release, consider that the tracks on this record were previously unreleased in CD format.

If you wanted to listen to the tracks found on Dropkick Murphys Singles Collection Volume 1, you would have to have been a vinyl record collector. I didn’t know a lot of people that did this when I was younger. I didn’t start collecting 7 inch records or any vinyl until I was out of college in 2007. Then I stopped in 2015 after I needed money. I also sold a lot of records in 2011 before I got divorced, as I needed money to fly out of the state I was in.

As far as Dropkick Murphys Singles Collection Volume 1, this record is a great collection of EP tracks, singles, and other songs that were released as part of the discography of the band up to 2000. Unless you had the “Ducky Boys” split, the “Anti-Heros” split, and the live records that the band had put out for their fans and previously unreleased tracks, you didn’t hear these, or didn’t have them. These were not put out on the records themselves, so you’ll enjoy the fact that the band was able to put on a showcase of their best work from their vinyl records, etc.

Some of these tracks you’ve already heard, since they are singles, including “Barroom Hero” which opens up the record. However, you’re going to get a ton of live tracks including “Do or Die”, “Never Alone”, “Boys On The Docks”, and “Ive Had Enough” featuring Jack Kelly of Slapshot. You also get “White Riot” live with Joe Strummer and Mick Jones of the Clash!

There are 24 songs on this compilation, and it highlights a lot of the early work from the Dropkick Murphys. Clocking in around an hour, you’re going to find that the Dropkick Murphys Singles Collection Volume 1 disc from Hellcat Records is a fine addition to your collection. If you already have all of the split vinyl editions of these, don’t buy this. But if you haven’t heard the live tracks, or want to complete your disc collection, or downloads, this is well worth your time.

I give Dropkick Murphys Singles Collection Volume 1 a 4 out of 5 stars. 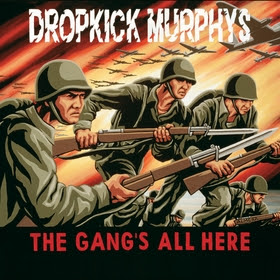 this has moved to jdune.com
No comments:

Music is the life blood that connects so many people. Regardless of language, culture, and other things that separate us, music continues to bridge the gap in many instances. It’s for that reason that I have decided to return to this blog. Starting next week sometime, I will be adding more reviews, content, and updates.

I have purchased a new pair of headphones, booked a trip to Spokane and Las Vegas, and will be listening to a lot more records. Today, for instance, I paid close attention to the discography of The Dropkick Murphys and have found new love for their previous work. I already loved it, but now even more.

Right now I’m listening to the new Rancid, and will be reviewing that. I’ll also be highlighting any independent artist that I can find, and of course if you drop me a few bucks, I’ll pay attention to you too. If you have emailed me in the past, or currently, I’m going to catch up with your stuff sooner than later. For now, just hold tight as I figure out my next course of action, which will involve a lot more writing, and music recommendations. Of course, you can support this blog by donating to the cause through paypal, message me, or buy something through the amazon links.

I’ll return, in a few days with a new review, and then just keep posting as fast I can, or whatever it is I do.

Thanks again for you 2 readers out there.

I’m back, just don’t call it a comeback, since I never really left.
No comments: