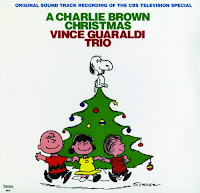 Released in 1965, this is one of the most talked about jazz recordings for Christmas. You’re most
likely going to see it in every store in a special tin. I prefer the initial December 1965 release that came out on Vinyl, but that’s just me. The remastered version takes out some of the ambiance, and white noise that you may hear on the recording. This was the soundtrack to the CBS special, and was done by the Vince Guaraldi Trio. This is one of the bestselling jazz records of all time, and has been touted as being triple platinum at press time. Every December more people pick up this record and are amazed by the jazz tones found. Recorded at Whitney Studio in Glendale California, the Vince Guaraldi Trio put on a showcase of jazz that really does encompass the showcase that aired. As the holidays are approaching, I found myself listening to this in the morning, and wanted to review it again here, before I forget. My favorite tracks here include “Linus and Lucy”, “Christmas Time Is Here”, “Skating”, “and of course “Christmas is Coming”. Make sure that you do not get the 2006 master of this one. In tracks 4 and 9 there are several mistakes made on the recording. That’s why I prefer the vinyl edition, but then again, I’m just a random dude.

If you haven’t picked up A Charlie Brown Christmas by Vince Guaraldi Trio, do so on vinyl here.