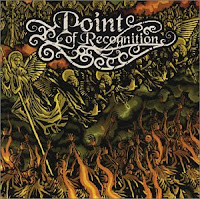 Hardcore records come and go, but in 2002, when Point of Recognition put out their third record, I wore it out. I loved the band, and really enjoyed the work that they were able to create in a short span of time. With the release of “Day of Defeat”, the band came together to put out their best effort, and it’s not just lyrically or musically, the production stepped up. Aaron’s vocals really shined here, with a much deeper song structure, and a booming bass and driving guitar that nailed the Southern California hardcore sound. I heard a lot of comparisons when this record came out, people saying that the release sounded a lot like All Out War, and even Warzone, but I think it was a strong, bass heavy brother of Warzone and Hatebreed. There was a lot of slow down here and there, with some great break downs and sing-along parts. The band put together one of the heaviest hardcore records for the time. The title track, is by far the best on this record. It’s loud, it’s aggressive, and should’ve been the one ticket that got Point of Recognition some serious crossover success. But of course, when you’re tagged as a “Christian” band, you immediately are dismissed from playing with the other kids. It’s too bad, because “Day of Defeat” is a fist fight recorded into 11 songs and 31 minutes of non-stop hardcore. I still can’t believe how good the band got in just a short span of time. RIP Point of Rec, I miss you guys and the So Cal Scene.

Like hardcore? Then give Point of Recognition’s “Day of Defeat” a shot, it’s an injection of hardcore from 2002.