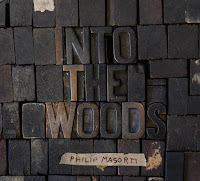 Philip Masorti is a name you’re going to hear come through a lot, because with “Into The Woods”, the singer songwriter is poised to become a big name in music. It’s with this release, that you get an incredible rush of emotions coming at you. This folk, country record is an outstanding release with a lot of lyrical elements to share. Masorti finds a way to tell you a simple story, and with each line, make it far more vivid, and at times more complex than anything you’re probably listening to right now. It’s a testament to the prowess he has as a song writer. It’s with “Bridges on 80” that the story telling really hits, and then never pulls away. The opening track “One World” is grand, but it’s the second track that you settle in to something altogether unique.

With “Into The Woods”, you really have a cinematic story on your hands. If you let this come over you in the stillness of night, you’re going to find a lot of balance between emotional lyricism and great musicianship. The song writing is great here, putting together some great notes of song and guitar work. There’s a lot more to this than the “folk/country” tag I mentioned earlier, this is a type of music that hits your soul, with unbridled emotion.

As the sun sets, you’re going to find yourself mesmerized by how “Into The Woods” plays so well with the day’s end. It’s a record that has some serious weight to it. By the time you get to “Truth Be Told”, you start to realize that this very well could be a huge record for Masorti. This could very well be that record you pick up right before he gets really famous, at least that’s my opinion, upon hearing the record and getting a sense for the many elements at hand.

There’s a lot to this record. There’s 8 tracks, but there’s a mix of country, folk, and even a little blues thrown into the mix. It’s a record that tells you a story with each track, and does so with an emotional gut check at times. Not everything is so deep, as there’s a playful nature to some of the tracks. Masorti is a natural story teller here, lyrically putting you in the middle of a movie yet filmed. Standout tracks include “Bridges on 80, “Lean on Me”, “Truth Be Told”, and “Willow”. However, this is another record that you’ll want to hear whole, not just with singled tracks.This is the type of album that doesn't leave you after you're done listening. It sticks around, it makes you reflect, it's that type of attention to details that makes music grand.

You can check out more from Philip Masorti via his official website here.