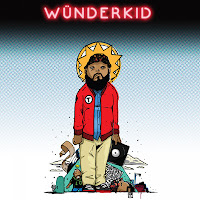 The only artist that I know with the name Thelonious is Monk. You know, the jazz pianist and composer that is one of the most recognizable artists of our time. But if you were to ask people to name another person with the name, you’re most likely going to hear them say Thelonious Martin. This is a rapper that has a lot going for him, especially amidst a lot of terrible rappers. I was recently in Los Angeles and my sister put on the radio, the only thing she listens to is hip hop radio from Los Angeles. Every channel was playing the most terrible and contrived rap songs, with the occasional mix of NWA, Warren G, Tupac, Biggie, and the rest of the classics. Other than that, people trying to sing, people trying to rap, and nonsense spilling from choruses of being drunk, high, or having sex. I’m not knocking that, but I need more than just the same old tropes in hip hop, and that’s where Thelonious Martin starts to come into frame.

The rapper doesn’t shy away from topics that you’d expect from hip hop, but he does so with a flow that seems all too natural. The greats make things look easy, and with the release of “Wunderkid”, he does so through 15 tracks and 44 minutes of music. It’s not just the delivery of the lyrical gems found on the record, it’s the production which showcases a well-rounded influence of genres. You get more cerebral elements in the beats, and the rhymes tell you stories of personal growth, relationships, sex, money, and bravado that you know is the key to success in hip hop.

Thelonious Martin is at his best in tracks that feature more than just his lyrical penmanship, because as you know the best records are the ones that have creative touches outside of the traditional. That’s where you find tracks like “September” mixing things up against true classics like “Atlantis”, “Corners of Your Mind”, and “The Home Team”. As far as a hip hop record, this is a great option. There’s so much to find here, so many sounds to explore, and a lot to work through. Don’t just listen to this on your radio in the background, put on some good headphones, grab your skateboard and fly through the 44 songs that will absolutely stun you at times, and give you a semblance of peace at others.

Overall, Thelonious Martin puts together a nice release with “Wunderkid”. It’s a solid outing, with a lot to offer. It’s the balance of thoughtful production, lyrical embellishments, and smooth delivery that makes this a stand out amidst hip hop records that I’ve heard this year. It’s definitely worth a lot of listens, especially if you are like me, and have to pick up on all the beats and similes.

Pick up Thelonious Martin’s “Wunderkid” if you are a fan of hip hop, otherwise, you’re going to miss out on something really cool going on with this record.