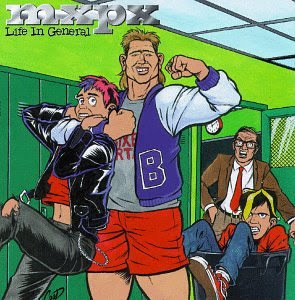 Ok, so after we discussed so much jazz, let’s discuss a little punk. I love punk. Ever since I first heard The Ramones, I was hooked. RIP CBGB’s! “Life In General” is the 1996 release from Mxpx. My nephew told me that these guys were and I took him to see them with Less Than Jake, and The Hippos. I felt old. But you know, these guys really were good. Anyways, this record features 17 tracks, and it’s done in 44 minutes or so. The drumming is what really stands out here, but it’s Mike’s bass delivery, and Tom’s guitar work that really puts on a rocking showcase. Stand out tracks include “Middlename”, “Move To Bremerton”, “Andrea”, “Southbound”, and others. I’ve seen these guys too many times, and they seem so much bigger than a punk band. Steve Kravac’s production stands out on this record, making it a must own for punk fans. Oh, and I love the artwork by “Coop”, so cool.

You can pick up “Life In General” by Mxpx new for like $10 around, or you can get it for $0.01 by clicking here. It’s a must own, especially the limited edition vinyl release.