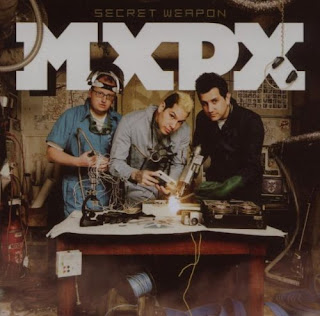 I was living in Seattle when Mxpx decided to put out “Secret Weapon”. It was officially put out July, 2007, and I had just moved in March. Living in Seattle was grand because that meant the band was doing a lot of in-store appearances. It was one hell of a record, and I had the special edition, plus the double 12” vinyl. The CD version was also grand, and I had them all signed when I met up with the band at Silver Platters. Anyways, this is a strong record with a lot of great songs, and possibly the best from the band since their 1996 record. Some of my favorites include “Secret Weapon”, “Shut It Down”, “Angels”, “Drowning”, “Chop Shop”, and “Bass So Low”. Overall, these songs are great, but the whole record is a huge release that deserves a lot more attention. It’s polished, it sold well, it’s a favorite, what can I say? Produced by Aaron Sprinkle, this is a killer sounding album.