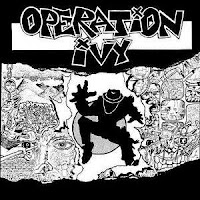 In 1989 I was still a young lad, and was being exposed to all types of new music. One of the coolest things that I was exposed to was the southern California underground music scene. I loved it so much, that I ended up joining the ranks and starting a record label in 2001. Today, I’m not in the scene, and don’t even live in Los Angeles. However, I still listen to a ton of music. One of my favorite records, and today’s review focus is that of Operation Ivy “Energy”. This record was release initially in 1989 through Lookout Records. You may know the label as the one that released Greenday’s early records.

As far as “Energy” is concerned, you most likely will pick up the reissue version that has 50 minutes of music. That is the one that I listened to in order to come up with this review. This updated version combines all the major tracks that Operation Ivy had. If you read the Buzzfeed list of the best pop punk albums, then you’re an idiot because this is NOT a pop punk record. This record is ska punk, with a lot of upwards strumming on the guitar work. Matt and Tim of Rancid are in this band, and you can hear their influences in the songs. This record touches on what Rancid would come through with, and it shows. Operation Ivy's "Energy" is one of the best ska records to pick up, even today.