I’ve met a lot of Sublime fans in my day. Lots of them know of Sublime’s self-titled, and when I mention these guys, they stare at me with a blank face. I then recommend that they put down the Sublime box set, and pick up this band’s 2001 effort. “Wonders of the World” finds the group putting out their best record, in my opinion. It was the last one, so it's not like I have a long list of options to compare.

For those that aren’t aware of this band, you have to go back to 1996. The band was put together after Brad Nowell died of a drug overdose. The band put out a record in 1999, but this is their 2001 release. With this release, the group would put together a lot of mixes from reggae, dub, to sonic ska. The ska sounds were mixed through a lot of members putting their spin on what made Sublime great. THIS IS NOT SUBLIME!

Well, it kind of is. The members of Sublime, before they found Rome, put this band together and they put together some great tracks on this record. This record is nearly an hour of mixes from the band. It features a lot of elements from drums, keyboards, flute, triangle, turntables, and ska’s signature upward strumming. It is really good to say the least.

For those that have short memories, you may not immediately recognize the single “Sunny Hours”, but if you know The Black Eye Peas, you can recognize Will I Am in the mix. “Listen To Dj’s” is another track you may recall, but overall, you are not going to pick apart this record. You will want to listen to this record whole, it beckons your call. As the mercury rises, and the summer days start to come through, pull out your records and listen to this release.

Fans of Sublime will immediately melt into the tracks found here. Including “Rolled Up”, which sounds like a B-side from the self-titled Sublime release. As far as a ska record, this is not a purist’s dream. It flows through various chambers. It begs to have a cold drink accompanying the songs.

I can wax poetic about this record a lot, but instead I will recommend you pick it up. You can get this via Amazon here. You can also search out the singles, remixes and more if you’d like. It’s unfortunate that it came out in 9/11/2001, otherwise it may have found a larger audience. It deserves a second listen, or first if you haven’t heard it. Long Beach Dub Allstars “Wonders of the World” still brings a lot of noise, although some Sublime purists will scoff at the notion.

- Get More Music - If you're going to buy music, and listen to the records I mention, please do so by checking out Amazon below. It helps me continue to build my collection, and it's much appreciated. Thanks. 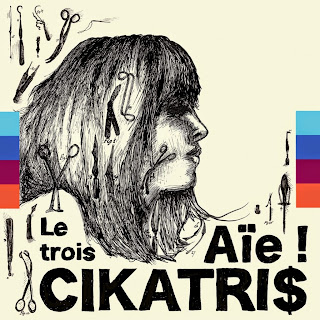 The neighbor downstairs likes to blast a lot of trendy, terrible music. I ask her once a week to turn it down, and it makes me feel way older than I am. Today, I won. I got to blast Cikatris as loud as humanly possible, shaking my cat’s sleeping box (she sleeps under my desk) and vibrating through the floor with a sub-woofer that made my neighbor ask me to turn down the music. I said no, and slammed the door in her face. That’s what she gets right?!? I felt bad. But the point of this story is simple, this band rocks hard and they take no prisoners with their music.

The band has a way of mixing noise, punk, and pop sensibilities to create a serious garage punk style that you are not going to find with many bands. As you listen to their latest double 7” record, you are completely enthralled with the silky smooth vocals and frenetic pacing of the guitar, drums, and bass. Oh, let’s not forget the keytar which is used prominently here. The record pushes through a lot of great nose and fuzz on the way to delivering a truly unique experience.

I’m not sure what track is my favorite, because they all blend in to make this album a unique experience in punk and noise. It’s really a good stylistic approach to what they call “avant-garde keytar-punk”, and it works. Straight out of Sweden, they find a way to completely compel me to listen again and again, even though I don’t know what they are saying. I love it. I think that more bands should be this experimental and focused all in the same. You are not going to find a track you don’t like on this epic release.

I love it. These punks are going far, and they are coming to the states to play, so make sure that you see them when they hit the streets. You’ll love them, I love them, it’s so cool. This is art, this is punk, this is core.

Listen to this and more via the official bandcamp page here.

Support the band as they tour too, they will hit these spots, so mark your calendar now!