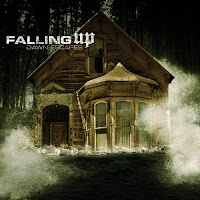 A lot of people have talked about Christian music as a terrible thing. Lots of bands put together alternative rock and tagged a label of “alternative” onto it, and ended up creating subpar musical landscapes. Then there are bands that put together truly good albums but were plagued by the label. Falling Up released “Dawn Escapes” after putting out what I felt was an ok effort. Their previous record was muddied by sounds that seemed to be trying to be Linkin Park mixed with other Nu Metal bands but without the power. The record had some ok tracks, but it wasn’t until their second release that the band was able to create something grand, at least in my opinion. It didn’t start with the first track on “Dawn Escapes” however, as they seemed to be resting on their laurels. However, as the album progressed, holy crap, the band found a creative niche that was overlooked by music fans left, right, and in the middle.

The piano entrance of “Exhibition” is your first signal that the band matured from their previous efforts. Released in 2005, you may have overlooked this since a lot of record stores were stopping their stocking of BEC Recordings and offerings from Tooth and Nail unless they were Demon Hunter and Underoath. I found this record at a festival that I went to, and was blown away by the second track. It featured melody, piano heavy elements, and a good flow through the track. It still had the signature Falling Up sound, but there was more to the composition than they previously offered.

As you listen to the record, you’re going to find that there is a lot of beautiful lyrical elements. With “Flights” you end up getting hit with that emotional connection of love. For those that are religious, there’s weight to the words on the track, but the music alone is a great example of the band’s ability to flow through various musical landscapes.

All this being said, the highlights of Falling Up is the piano and electrical components. The track “Contact” shows this off very well, and you truly start to see the direction that the band was taking at the time. This would become even more relevant in their records as time progressed. The rest of the record goes well, mixing in electronic hits with choruses that really force you to sing along. Falling Up found a way to match their lyrical prowess with truly alternative music at a time where everyone was trying to be the second coming Nu Metal. They stepped aside and created an eclectic follow up to “Crashings” in my opinion.

This precursor felt like an appetizer from the band, however. The vocals were a bit too high in my opinion. But they changed things up a year later, when “Exit Lights” came out. It was with that record that I truly started to capture the message and focus of the band’s music. That electric feel was made whole when I saw them at the last Tom Fest, where they played to a handful of individuals, in what may have been the lowest attended Christian music festival I’ve ever seen in my life.

“Dawn Escapes” is a good record. It’s not a great record, but it was a transitional change over that I appreciated from the band. I still go back to listen to this record quite a bit, but only because I’ve seen the band play things live, and I liked it enough to keep it in rotation.

If you haven’t heard Falling Up’s “Dawn Escapes”, pick it up here. It’s well worth your time, if you’re a fan of BEC, Christian music, or just alternative records from the past.