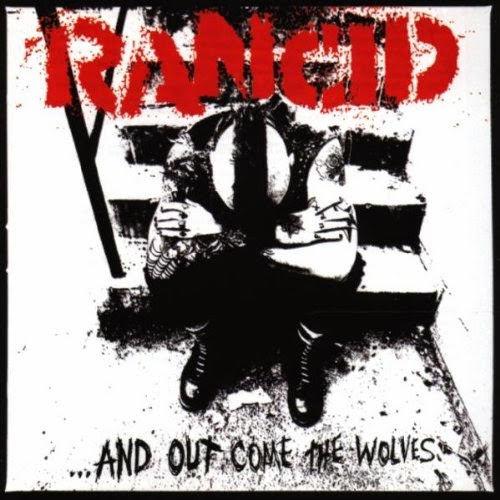 It astonishes me how old I’m getting, especially when I listen to some of my favorite records and realize that they are nearly older than my younger sister. Rancid released “And Out Come The Wolves” In 1995, and I was only 12 years old. I purchased the cassette tape from Epitaph Records. They had a catalog that they mailed people, and I filled it out in pencil, put a few dollars into an envelope and next thing you know I had a new cassette tape, some stickers and a sampler. That was how it was done back then, now? I don’t know what happens now, people just download stuff I guess.

Rancid’s rise to fame was not something that happened over night, they pushed and pushed through the Bay Area punk scene until it hit big. This record is by far one of the top selling albums in the punk world, and one that everyone probably already has in their rotation, and if not, what’s wrong with you? From the opening track of “Maxwell Murder” through the singles that you probably heard on the radio one hundred times, this album still has some incredible songs. 19 tracks of blistering punk rock that is not only true to the genre, but also features a lot of melody and some of the greatest bass lines that you’re going to hear today.

Of course you’ll probably have your favorite tracks, but for me, “Roots radical”, “Junkie Man”, “Daly City Train”, and “Avenues and Alleyways” present incredible songs with lyrics that remind me of my past, present and future. There’s no pretense found on this record, it’s just the band at their best. They have released a lot of records since, but when you start to hear the new stuff, you will be reminded of the roots of the band’s break out hits.

Rancid’s “And Out Come The Wolves” is an inspirational punk rock record that should never stop being played in your collection. I know I will never stop playing it, as this really is one of the infest pieces of modern punk rock. If you haven’t picked this one up yet, click here and get it, it’s seriously good.