Figures of Light R U Ready? Delights In Shifting Genres On The Fly 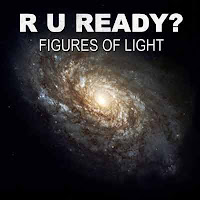 I’ve reviewed a lot of Figures of Light records in the past, so when this came across my desk I thought I knew what was going to be heard. Then the first track played and it surprised me. Figures of Light once again break the mold and create a lavish display of musical hop scotch. Not satisfied with being put into one genre, the band pulls together influences across EDM, indie, garage, surf, and punk to create a lavish display of music.

On “Good News At Last (Mike’s Mix)” you are given one of the best songs ever put to tape from the band. It’s this type of quality that made bands like Minus The Bear’s “Highly Refined Pirates” so many recommendations. Figures of Light’s second track on this release is by far my favorite. It pieces together everything I could want from a song, melting together my love for instrumentals, and the rock concepts that made me such a big Starflyer59 fan upon first hearing. This track is golden, on a record that has several stand out moments.

The band doesn’t stray from crafting together different connections though, as they quickly throw you for a loop with a garage, surf, retro style mix on “Can’t Let It Go”, before landing squarely on a new edge with “Dragstrip (Nathan’s Mix)”. It’s logical, heavy, and works so well within the band’s segments. You flow through the record and eventually hit “Sunday Meditation” which is just that, a flowing song of simplicity, and it closes out a record that touches on the best of what Figures of Light does.

“R U Ready” is a record that is not defined by one style, genre, or musical concept. There’s a spatial element to it, there’s points of contention with that solve themselves through the layers of music, and then there’s tranquility to calm your nerves at the end. All in all, this is one of the best records that Figures of Light has put out. I recommend it highly.

This is a killer new cut from Figures of Light - a bit of trance and dub mixed together - dig those images! Figures of Light was an American music band founded in 1970, which disbanded in 2015. This channel features some of their videos as a permanent archive. Check out our website at http://www.figuresoflight.com