P.O.D. The Awakening Shocks The System With A Concept Album of Immense Purpose 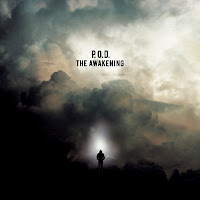 P.O.D. has been going strong for a long time. I remember hanging out with Sonny and the boys way back when they were playing shows up and down the West Coast with Dogwood. That’s a long time ago, and since then, the guys have been packing away some of the most powerful songs. This time around they have gone full tilt with a concept album called “The Awakening”. It’s equal parts metal, rap, hardcore, and reggae. The band has really fused together some of their best elements, and has really ramped up the production this time around. The band is absolutely at their most melodic, and urgent with this one. If you are a fan of the Deftones recent pushes, you’ll absolutely love this record, because it very much feels like a brother of Deftones and Incubus right now.

Stand out tracks are all over this 45 minute instant classic. The record plays through a dramatic, visual line and story. Close your eyes and listen, and you’ll be treated to a story told in music and in cut scenes. The tracks ring out heavy, and you get a feeling for the amount of work that the band has put in to put this together. Tracks like “This Goes Out To You”, “Criminal Conversations”, and “Somebody’s Trying To Kill Me” all deliver that signature sound that the band has been famous for, but with a bit of melody to swerve you from time to time.

If I had to pick a track that stands out amongst others, I would say that “Want It All” should be a platinum selling single. It mixes jazz notes with Sonny’s lyrical delivery that is very much a powerful thing for the band. The guitar and bass come through with a nice touch, whereas the drumming is absolutely fabulous here, even though the song is not the hardest on the record. If that wasn’t the best one, I’d say that “This Goes Out To You” is a banger that definitely deserves your attention.

All in all, “The Awakening” is a concept album that really is on fire. P.O.D. have found a way to get me interested in what they are doing all over again. The same urgency I had when I spent $300 to see them at the Glasshouse upon the release of “Fundamental Elements”, has once again got me and it’s an eclectic presentation of the band’s influences. You owe it to yourself to pick this one up, it’s that good.