Hollywood Drunks Smash Through Genres With Precision on Swell 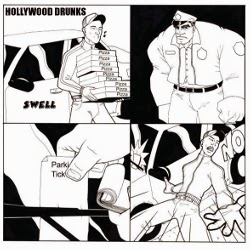 There’s something familiar about Hollywood Drunks, and yet I can’t figure it out. With their album “Swell” they go through a spinning wheel of genres and remind me of so many bands, and yet they are all alone on their platform of cool. At first you want to try and compare them to The Red Hot Chili Peppers, but they shake that vibe by the second track, and then take you on a course of catchy, rock infused tunes right before they drop you into a world that sounds all too much like television. That’s not a bad thing, it’s comforting, like a warm blanket on a cold day, it’s refreshing music and it’s got a lot to offer.

The first track that struck me greatly was “That Age” as it has such a classic sound to it, modern rock, adult contemporary, jingle ready, commercial appealing, and full of melody, guitars, bass, and just “good” music. It took me back a little to the first time I heard The Roots on a skateboard video, because their sound plays so well with so many other talents, and it’s a testament to the deluge of music that is coming out without enough ears to hear it.

Commercial appeal aside, Hollywood Drunks play many sides of the musical fret board, offering fans of blues, rock, jazz, and even a little bit of funk something to smile at. I found their musical set changes refreshing, and really enjoyed going through different emotions. Eric Winzenried’s vocals stand tall amidst driving bass lines, keyboard tunes, and guitars that are equally crunchy at times as they are bluesy and more. This is a good record, full of layers, and interesting lyrical components that you don’t always get with popular acts today.

By the time you hear “Swell” you’re sold on the record, as I was totally into it by that point. I like the melodies, the song structure, and the lack of pretense that sometimes riddles genre bending records. If you want to listen to this album, check out the Hollywood Drunks official webpage here. It’s a good record, and definitely deserves more attention.